One of the things I like best about writing science fiction is doing the research. This weekend I've been reading about gravitational waves for a short story I'm writing that involves inter-dimensional travel...I already did a bit of reading on "multiverse" theories, but decided to work something I'm calling a "gravitational pulse" into the tale, and gravitational waves are giving me the basis for the concept.

Elephant grief isn't exactly fun to read about or see (there are photos and videos online that are positively heartbreaking), but I have a story idea that requires me to understand it as best I can (without spending weeks or months in the field getting in the way of real researchers). Doing so has heightened my belief that hunting elephants should be banned worldwide and elephant hunters should be shot on sight in the field, or arrested if possible. There are plenty of ways to prevent dust-ups between humans and elephants without resorting to the killing of elephants. It's hard not to believe that elephants will become extinct within my lifetime.

Speaking of extinct, I've also done a bit of research on dinosaurs for a story (or maybe a series of stories and novels...we'll see) that's been a lot of fun. I can't get too deep into why, but it involves dinosaurs and their evolution had they not died out.

And then I've been reading a lot about humanity's early ancestors, such as Neanderthals and "hobbits" and Denisovians...again, for a story that I don't want to get too deep into here while I'm writing it. It's fascinating to imagine what civilization might have been like had the various branches of humanity (and I use that term broadly, obviously) had continued to advance separately...
Posted by Stephen at 8:55 AM No comments: Links to this post

One of the hardest things for me to when it comes to writing lately is to stay focused. Part of the problem is that I have trouble believing that what I am writing will find a paying outlet. Not that this is my primary reason for writing, but I have to put a certain amount of effort into things I know for sure will bring in money so I can pay my bills. Unfortunately, when I do creative writing I am essentially taking a big risk that, in all likelihood, at least according to past performance, I will not make any money on whatever it is I am writing. This has the effect of causing me to procrastinate, to start more projects than I finish, to work on something for only a few minutes at a time rather than hours, and to just go for days at a time without working on anything creative.

As it is now, I am trying to write to pieces of fiction: a story called "Love and Death in the Time of Thunder," which is a story I think it really cool and could lead into a whole series, and what started out as a story that may wind up as a novella or even a novel, which I am tenatively calling "Imeweus" for "I, Me, We, Us." This is a story that may get more philosophical and deep than much of what I've written in the past, so I am keen on continuing it. I am trying to stay focused!
Posted by Stephen at 7:22 PM No comments: Links to this post

Taking a So-So Short Story and Making It Awesome

A while ago I wrote a short story called "Imitation Joe" that really didn't come off very well. I essentially had half an idea, that an alien gelatinous creature essentially devours a man and then recreates that man, including all his memories and emotions and mannerisms, etc. Sort of an extreme version of a Turing Test: given that everything about this man was the same as it had been before being devoured, was he the same man? Or had the original version of himself died and was this merely a copy, an imitation? Sort of like the argument behind the transporters on Star Trek: do they kill the person each time they transport him or her, and is the person who is assembled at the destination merely a copy of the original?

And if so, does it matter?

So, I had this half-an-idea and suddenly decided to really flesh it out and extend it beyond the original story. I am now turning it into what I suspect will be a novella, or maybe even the beginnings of a novel, which I am calling "I, Me, We, Us" or maybe something like "Imeweus" to give it a less obvious title...

The concept here is that the alien entity winds up combining it's "self" with the "self" of the human, breaking down and then reconstructing everything about the human, who experiences every moment of the process - or seems to; I intend to make that rather vague - so there is a clear continuation of "self" during the metamorphosis into the alien/human hybrid...or perhaps a better word is the alien version of the human.

There's more to it, as well. The gelatinous alien is a single entity split into essentially an infinite number of shards that then merge with other life-forms, absorbing their identities and experiences, and if/when these re-merge with other shards, the experiences are shared, so the main characters also have memories of aliens who were absorbed, even entire species who were absorbed by the alien entity.

The alien entity is also possibly the first actual intelligence to have emerged in the universe, on the first habitable planet that the universe created.

It's a fun idea that I've decided to take as far as my imagination will let me!
Posted by Stephen at 11:33 AM No comments: Links to this post

I've been taking a class this summer, which ends on Friday. I plan to get to writing later that day. Not sure what to work on...my YA sci-fi novels needs to be rewritten, as does the short story "Imitation Joe" I wrote last year. I also several unfinished projects to write and some new stories I want to write. Need to get back to having a writing schedule!!
Posted by Stephen at 11:48 AM No comments: Links to this post

He was one of my best friends and one of the reasons, I now realize, why I loved the world(s) of science fiction and fantasy and why I've remained a steadfast fan of the genre ever since discovering it as a kid. Like me, Gary loved reading it, watching it, talking about it, and most especially writing it. Like me, he did not achieve the level of success he'd hoped to, and like me he resorted to self-publishing the bulk of his work as e-books. Gary was always ready to explain the "Sense of Wonder" he felt, and even after I become somewhat jaded and bitter about writing, he remained wide-eyed and passionate about it. I don't think he ever lost the joy of writing, no matter how many times his stories were rejected. It's a tough gig to try and make it as a writer, but he never gave up.

I think I am going to refocus this blog on science fiction and fantasy, and on the projects that I undertake to write and sell, or write and self-publish.

Gary only made it to the age of 61, but he did at least manage to get his "magnum opus" out into the world. Here's a link to the first book in the 6-book series. I believe he wrote these books for a very specific audience: himself. However, if you like "heroic fantasy" you might want to check it out:

When you read it, you'll be not only be reading something that Gary loved to write, but you'll be reading what he loved to read, and you'll be visiting the world that, if there is any justice in the universe, is where he lives now.

Goodbye, Gary.
Posted by Stephen at 9:26 AM No comments: Links to this post

Here's the cover for my new ebook, a short novel due out this week on Amazon.com. Cover is by Alan Davidson. 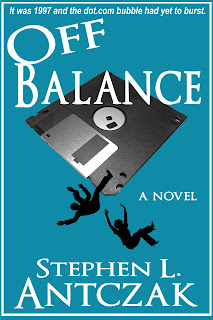 Posted by Stephen at 5:38 PM No comments: Links to this post 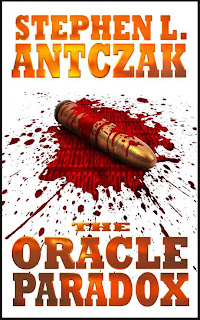 The cover for my new novel, currently ONLY available on Amazon.com as an ebook for Kindle.
Posted by Stephen at 9:56 AM 2 comments: Links to this post